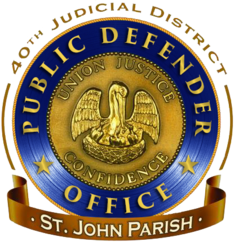 HISTORY ABOUT THE ORGANIZATION OF PUBLIC DEFENDERS IN LOUISIANA
After the adoption of the Louisiana Constitution of 1974, court-appointed attorney services were established under the framework known as the "Indigent Defender Board".  Today, the Public Defender Office represents many people who are employed, but are unable to afford a lawyer.  In the current Criminal Justice system, most of the people in criminal court are represented by a Public Defender.

ORGANIZATION
State courts are established in each of the 42 judicial districts in Louisiana. The St. John the Baptist Parish Public Defender Office is in 40th Judicial District.  The local office has been led by the District Public Defender, Richard B. Stricks, since 1995, when he was hired by the Indigent Defender Board comprised of Jules A. Carville III, Harold M. Keller, and Sylvia Taylor Steib.

The LPDB does not represent clients. It was formed to provide a regulatory and supervisory framework for the Public Defenders only.  It cannot appoint a particular person or remove a lawyer from a particular case.

LOUISIANA CONSTITUTION, (ARTICLE 1, SECTION 13)
The Louisiana State Constitution guarantees that when any person has been arrested or detained in connection with the investigation or commission of any offense, he shall be advised fully of the reason for his arrest or detention, his right to remain silent, his right against self incrimination, his right to the assistance of counsel and, if indigent, his right to court appointed counsel. At each stage of the proceedings, every person is entitled to assistance of counsel of his choice, or appointed by the court if he is indigent and charged with an offense punishable by imprisonment. It is the responsibility of the legislature to provide for a uniform system for securing and compensating qualified counsel for indigents.